In our brand new series ‘A delayed focus on the latest PhD theses at CRCN’, please welcome Virginie Drabs, and her friends, consonants and vowels…

Hi Virginie, I heard you are really into letters, and that you argue for a distinct processing of consonants and vowels. Please tell us about your research…

My research focuses on written word processing, and more precisely on word parsing into smaller units, as vowels and consonants. Many studies have demonstrated that consonants and vowels are processed differently during written word recognition. On the one hand, vowels are core units for segmentation in orthographic units. For instance, the word ‘biberon’ in French counts three orthographic units, because there are three vowel clusters, but only two syllables. On the other hand, because consonant letters are more frequent than vowel letters in the alphabet, words sharing the same consonants are less frequent. Consonant skeletons thus impose higher lexical constraints on lexical selection. As a consequence, it has been claimed that letters are processed as being in one of those two categories. However, we do not have any direct evidence supporting this assumption. 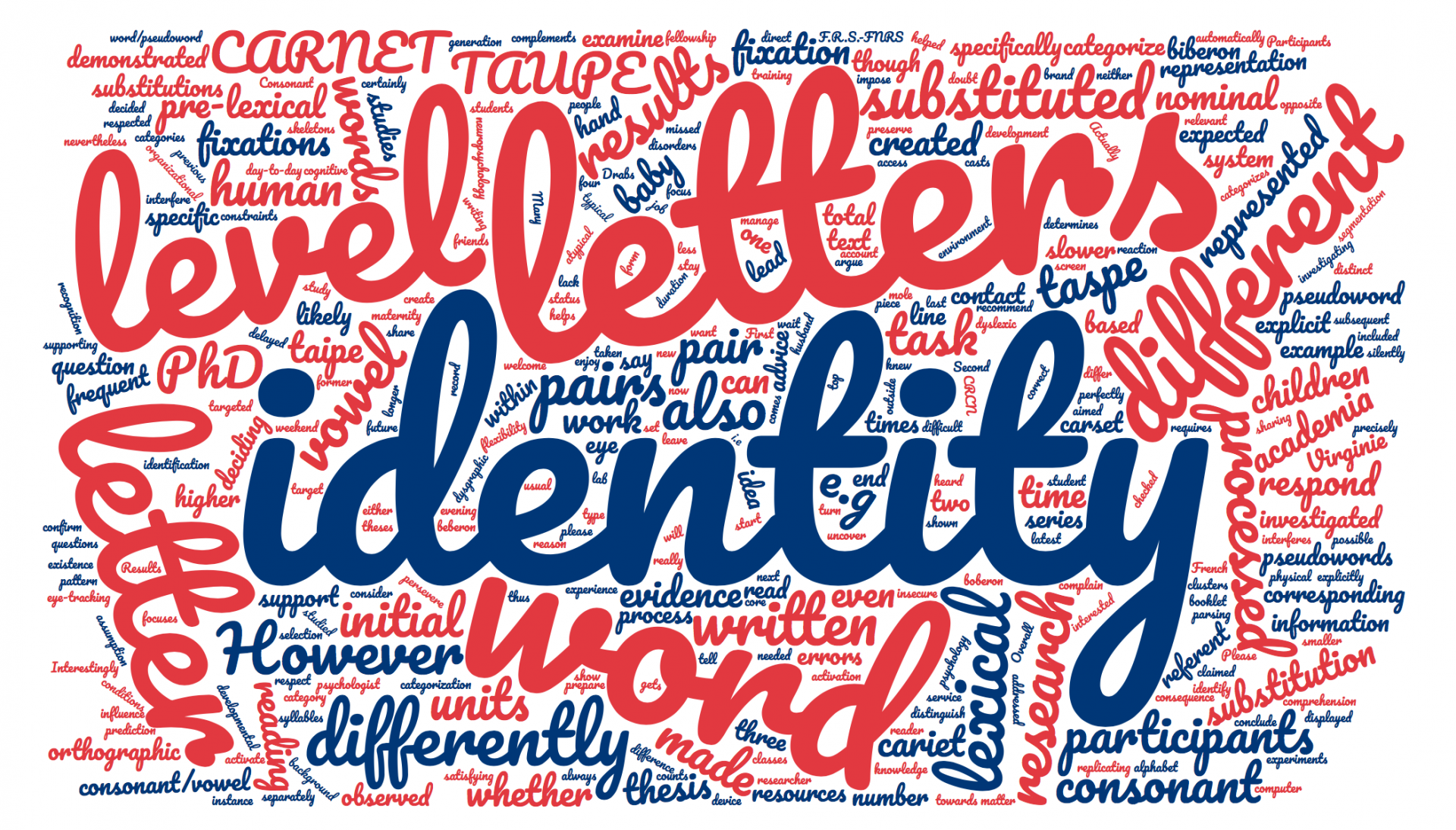 You addressed this research question separately for letter and word processing…

Is the consonant/vowel category of letters represented at the level of word identification then?

A reading task to examine word processing at the lexical level

What can you conclude from your studies?

All in all, our results do not support the idea that the categorical identity of letters is specifically represented, neither at the level of letter processing, nor at the level of word processing. However, vowels and consonants are processed differently, as demonstrated in my thesis. First, at the letter processing level, there is evidence of a knowledge of the categorical identity of a letter. Second, at the word processing level, the consonant/vowel status of the letters determines the level of activation of the letters, which in turn helps the system to distinguish consonants and vowels. But this comes with no explicit categorization of letters.

Do children with developmental disorders process consonants and vowels differently?

It has been shown that reading errors of dysgraphic children are likely to preserve the categorical identity of the initial letter (e.g., ‘biberon’ will be read ‘boberon’ or ‘beberon’). But there is no evidence for this type of errors in dyslexic children. Further research is needed in typical and atypical development, to uncover how and when we start to process consonants and vowels differently, even though this difference does not lead to a specific, explicit level of representation of the categorical identity of letters.

What is your experience of having had a baby during your PhD?

My husband and I did not want to wait to have a baby and my maternity leave has been taken into account for the duration of my F.R.S.-FNRS fellowship. And we enjoy some flexibility in our work, so it was not difficult to manage. Actually, I have to say that my baby helped me at the end of the writing.

On top of all this, you studied human resources in evening and weekend classes…

When I was a student, I was both interested in cognitive neuropsychology and in work and organizational psychology. During my thesis, my day-to-day job was not targeted towards service to people and human contact, and I missed that. And I say this even though we certainly cannot complain about a lack of human contact here at the lab. I knew I would not stay in academia after my PhD, for this reason, but also because it is an insecure work environment. A training in human resources perfectly complements my background as psychologist and researcher.

And now the usual last question: do you have any piece of advice for the next generation of PhD students?

My advice would be to persevere with their thesis, because it is very satisfying in the end. I would also recommend to prepare for the future, within academia but also outside of academia.