Last year, Catherine Demoulin defended her PhD thesis, dedicated to the impact of literacy on working memory. Here is the interview, at last and with the sincere apologies of your devoted interviewer.

Can you briefly introduce the topic of your thesis?

I investigated whether learning to read influences the development of verbal working memory. Working memory is generally considered as crucial for academic performance, and for reading acquisition in particular, but the reverse causal link has been neglected. In other words, the vast majority of studies were unidirectional, predicting reading abilities from earlier measures of memory without considering the converse relationship, that is, the potential (direct or indirect) contribution of progress in reading on the development of processes and representations used in verbal working memory. The first study of my thesis examined if the development of working memory can be influenced by entering the first grade of primary school, when the focus is on reading acquisition. Results suggested that working memory performance can change with schooling, and potentially also with the acquisition of literacy. However, disentangling the roles of schooling and literacy is not easy, because so many changes occur during the first grade at school. 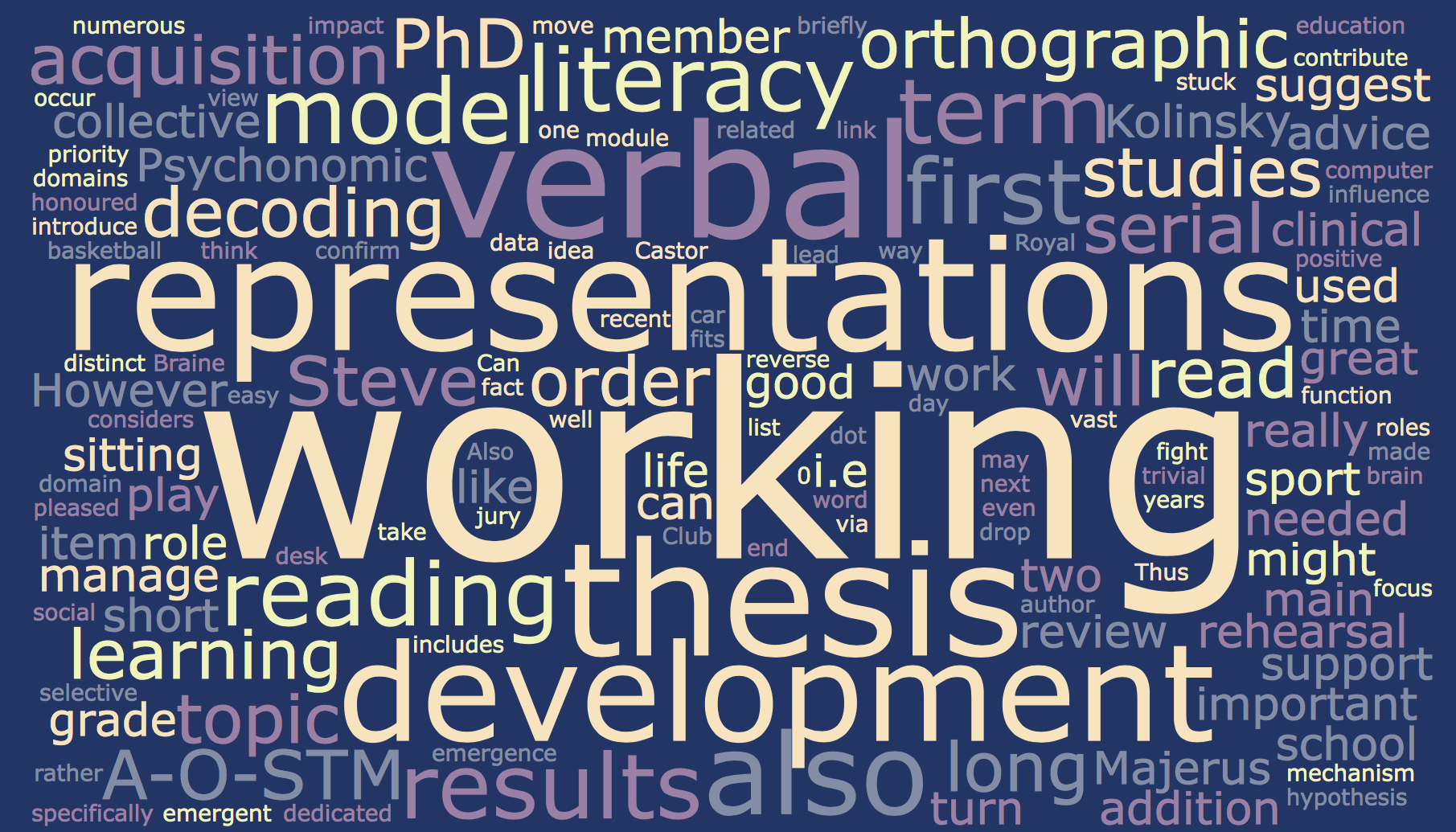 In a literature review published with your supervisor Régine Kolinsky in the Psychonomic Bulletin & Review, you advocate a significant role of literacy in the development of working memory…

Indeed, we suggest that learning to read might shape the working memory development via:

1. The support of orthographic representations

2. The development of phonemic awareness

3. The process of decoding in learning to read

Thus, the emergence of phonemic awareness and orthographic representations might enhance the quality and precision of the language representations, which, in turn, would improve encoding and retrieval of verbal information in memory. In addition, as decoding implies similar processes than those involved in maintaining verbal information (as in rehearsal), we have proposed that the intensive practice of decoding in typical beginner readers boosts some strategies used in verbal memory, such as cumulative rehearsal, which in turn would lead to better serial order memory performance.

In your thesis, you refer to Steve Majerus’ A-O-STM framework when you conceptualise working memory

That is correct. A-O-STM stands for Attention, Order short term memory activation model. Before starting the PhD, I attended one of Steve Majerus’ talks and I was convinced by his view of the working memory system, which is at the same time theoretical and clinical, where other recent models of working memory are not easily transferable to everyday situations involving working memory. The A-O-STM model considers verbal working memory as an emergent function of linguistic long term representations. In addition, the model includes a module dedicated to the representation of serial order (i.e., distinct from the item representation), and a mechanism of selective attention. This model fits well with our hypothesis that literacy has a positive impact on working memory. I was very pleased and honoured to have Steve as a member of my thesis jury.

What are the main results of your work?

My results support the idea that linguistic long term representations play a role in verbal short term memory, as suggested by numerous studies. The data also suggest that orthographic representations dot not influence memory for serial order, but may specifically contribute to the maintenance of the information related to the item (i.e., which word was in a list). However, further studies are needed to confirm these first results.

You play basketball in the Royal Castor Braine Club. How did you manage to combine a very individual doctoral thesis with a collective sport?

I really needed this time off, because I don’t like sitting at a desk all day long. I think we are made for moving, not for sitting behind a computer or in a car. Physical activity is also important for the brain. It improves attention and memory, and is also a good way to fight anxiety and depression. A collective sport is also good for social life. In fact, during the thesis writing, the hardest to manage was rather the family life (I have two young children, and they take priority).

What will be your next move?

I am interested in two main domains: clinical neuropsychology and education. Also, I would like to be an author in the psychological domain.

Do you have any advice for PhD students?

It may sound obvious, but the most important to me is to work on a topic that you are really passionate about, because your thesis is your own project and you will be stuck on the same topic during years. After that, I would advice to be perseverant and not to drop out, because at the end, you will have a great satisfaction to achieve a PhD, even if the results were not as great as you expected.