You just obtained your PhD. How does that feel?

It is an amazing feeling. Defending your PhD is an unbelievable experience, both on the intellectual and the personal levels. The members of the jury have read and (hopefully!) understood your work, what you have been doing for the last 4 years or so. And all your friends and family are present, they are very supportive.

Did you feel stressed?

Yes, a little, but not too much though. It is the achievement of 4 years. You want to be at the top, you want to make yourself clear and help people understand what you have been doing. That is the challenge. But at the same time, you are the expert in that field, because you are the only one who has been working so much on that topic for such a long time, so you can be fairly confident that no one else would know it better than you. 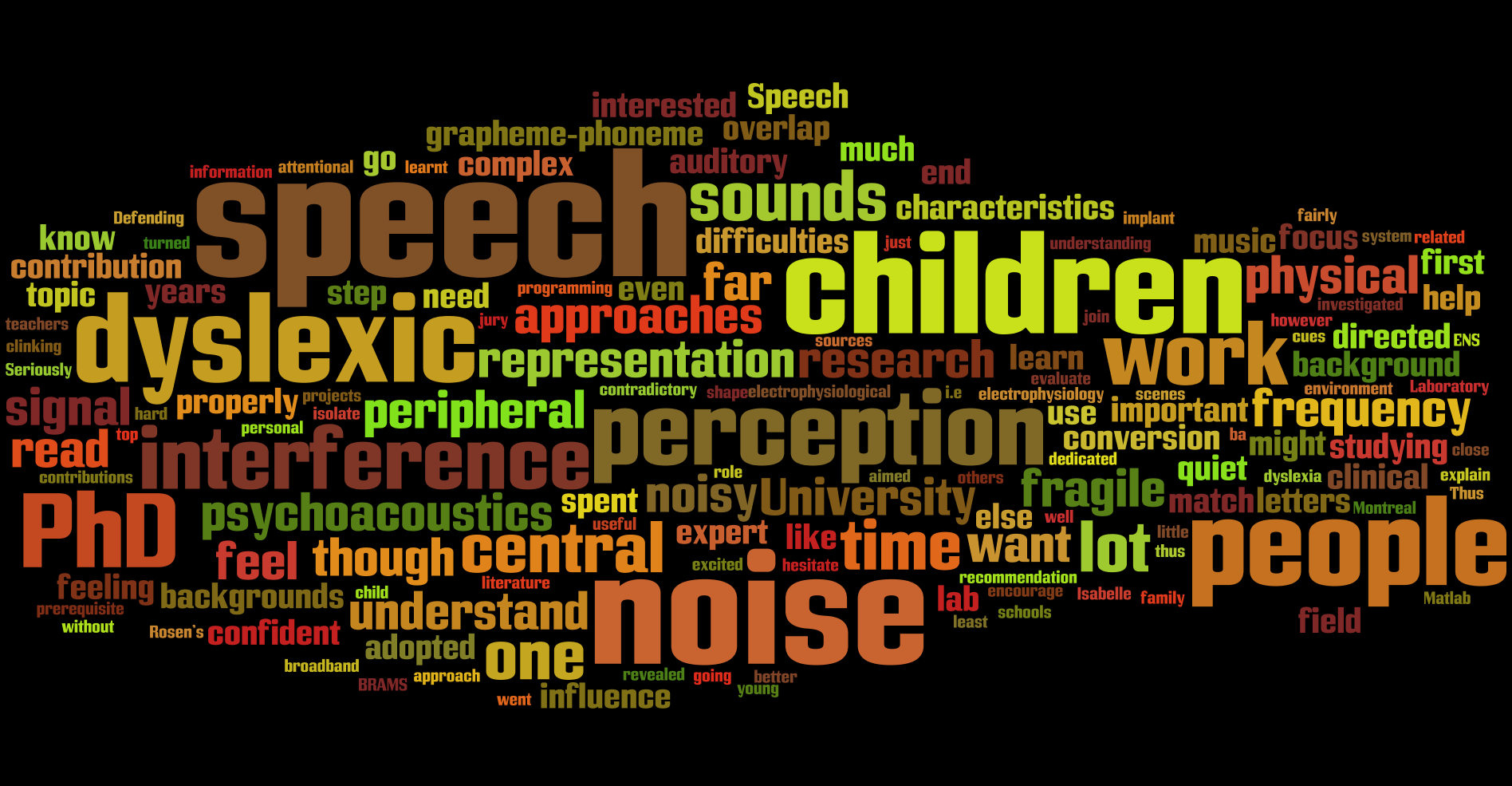 Your doctoral work was dedicated to speech perception in noise. Could you tell us more about it?

Let’s say you are at a restaurant and the people around are chatting, glasses are clinking, there is music in the background. In such a noisy environment, it is very difficult to understand what one person in particular is saying. Some people have important difficulties understanding speech in noise, even though they have normally functioning ears. It has been suggested it was the case for dyslexic children, but so far the results in the literature were contradictory. We investigated speech perception in noise in dyslexic children. Noise can induce an interference with the relevant signal, i.e., the speech you want to understand. There are two sources of interference: (1) a peripheral interference, at the level of the cochlea, due to a physical overlap between the frequency of the noise and the frequency of the target speech and (2) a central interference, without any frequency overlap. My research aimed at specifying the peripheral and central contributions to the speech perception in noise difficulties encountered by dyslexic children.

What was the finding you were the most excited about?

So far it has been impossible to isolate the central contribution of noise in complex auditory scenes, like cocktail parties, because of the physical characteristics of the speech. Speech is indeed a broadband signal with a lot of simultaneous frequencies. We took a first step in that direction. Of course, it is not perfect yet and there is still a lot of work to be done, but at least it will broaden the debate and will encourage people to use other approaches.

It seems to be a non-conventional way to study dyslexia, as many studies focus on the grapheme-phoneme conversion…

Learning to read requires the child to acquire the grapheme-phoneme conversion: he/she has to match the letters and the sounds. If the sounds are not well represented, it is harder to match them properly to the letters. The hypothesis that was formulated by others and that I adopted in the end is that the representation of sounds is fragile in dyslexic children. In quiet, it could go unnoticed because you have a lot of cues to get the information you need. But in noise you lose redundancy in the speech signal, so in the end, you might be confused between a ‘ba’ and a ‘pa’, that sound very close, but are very hard to distinguish in noisy backgrounds. That was the new approach that was adopted lately: speech perception in quiet could be preserved in dyslexic children, even though they have a more fragile representation of the phonemes. However, this fragile representation could be revealed in noisy backgrounds.

How did you build the prerequisite expertise to investigate such a specific and complex topic?

After I graduated, I first went to the BRAMS lab, directed by Isabelle Peretz, at the University of Montreal. I was interested in how music would shape the brain or inversely. But then I had the feeling that their research was one step too far from what I was really interested in. I wanted to know more about the sounds presented to the listeners and how their physical characteristics would influence perception, which is what psychoacoustics is about. Thus I spent 8 months in Christian Lorenzi’s lab at the Ecole Normale Supérieure (ENS) in Paris, as a research assistant. I learnt a lot about programming, psychoacoustics, and the auditory system. All of this turned out to be very useful in my PhD. During the PhD, I also spent some time in Stuart Rosen’s SHAPS Lab (Speech, Hearing & Phonetics Sciences) at University College London. Their work is at the boundary between pure psychoacoustics, clinical approaches (work with dyslexic children, and people with a cochlear implant) and electrophysiology. They use theoretical approaches to improve clinical remediation. This makes thus the bridge with what I was doing.

I will be going to Boston University, to join the Auditory Neuroscience Laboratory directed by Barbara Shinn-Cunningham. I will be studying the role of attention in speech perception in noise, using electrophysiological measures. This project is in direct line with my PhD, because we will evaluate the influence of attentional factors on the respective contribution of peripheral and central interference induced by noise in background. Here however, we will focus on young healthy adults, instead of dyslexic children.

Are your hobbies somehow related to what you are studying?

If I had time, I would like to be involved in educative projects. I would go in schools and try to explain to teachers why it is important to learn how to read properly to the children, and how to do that. Now that I feel more expert in the field, I think I might be confident enough to start doing that in the future.

Do you have a recommendation for people who enter the PhD program in cognitive neurosciences?

When in doubt, play Tetris. Seriously, you definitely have to learn programing in Matlab!!! And don’t hesitate to ask someone else if you need help, people are so nice here.