Last week, Emilie Caspar, from CO3, presented her PhD thesis, entitled “What governs our sense of being an agent? An experimental and electrophysiological approach of how disturbances in the intention-action-outcome chain modulate sense of agency ”. She conducted her doctoral research under the supervision of Axel Cleeremans . As we will see, she did not just work on that during the last three years. We met her to know more about her and her research.

First of all, congratulations on your thesis. Why did you choose this research topic?

I have always been interested in neuropsychology and neurosciences on the one hand, but also in forensic sciences on the other. In particular, I am interested in deviant behaviours, I want to investigate their neural underpinnings and the individual differences that could explain why some people hurt others. That is why I graduated in psychology and then in forensic psychiatry. I wanted to conduct research on free will and I asked Axel Cleeremans if he could supervise my PhD project. At the time, he was very interested in the Libet experiment. Libet is famous for his studies about free will and action. The task is quite simple: Participants watch a dot continuously rotating on a clock. They have to press a button whenever they feel like doing it, and they also have to report the position of the dot on the clock when they had the intention to press the button. Those studies have shown that intention precedes action, but most importantly, that brain activity directly related to the action also precedes the conscious intention. This has generated passionate debates about free will and consciousness. The first studies I conducted examined how personality traits could interact with the Libet effect. 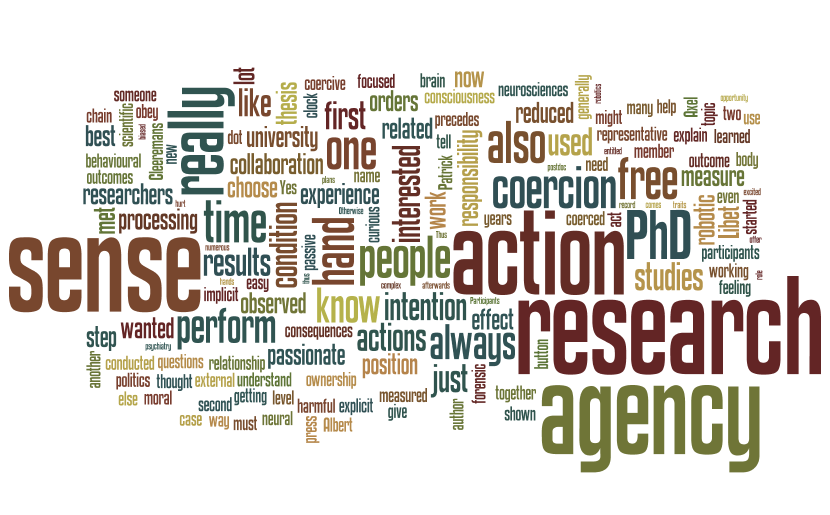 Then you met Patrick Haggard, who is a reference in the study of free will…

Yes, I met him in a conference and I wanted to start a collaboration with him, on a related topic: the sense of agency. The sense of agency is the feeling you are the author of your actions and their consequences in the external world. When we first started to collaborate, we focused essentially on the relationship between the sense of agency and the sense of ownership, which corresponds to the recognition of our body parts. These two aspects of the self are sometimes confounded because the body is generally the vehicle of our actions. Then, we continued by exploring how the experience of agency comes about, that is, when exactly, in the chain of events from your intention to its consequence, you experience a feeling of authorship. Even if we continue working on such research questions, our collaboration is now related to another aspect of the sense of agency, that is, its relationship with the notion of moral responsibility. It is a great opportunity for me to work with Patrick on this line of research, which brings together neurosciences and Law.

What are the main results of your research?

The research question I have been the most curious about concerns the sense of agency in a coercive context. What happens when people receive orders? Why do so many people obey orders? Apparently they can handle the consequences of their actions, if someone else told them to do so. People can always say that they were “only obeying orders”, as was the case in the Nuremberg trials. This might just be an explicit statement in order to avoid blame or punishment: you always find an external attribution to your responsibility. We used a behavioural measure of agency, which has to do with the subjective estimation of the time separating an action and its outcome. This implicit measure is less likely to be biased. We compared a condition where participants were free to choose which action to perform with a condition where they were coerced to perform a specific action and we measured their implicit sense of agency. One could expect no difference between these two conditions, as the sense of agency was measured implicitly and we know that the sense of responsibility is reduced under coercion when explicit measures are used. But what we actually observed is that under coercion, you really experience a reduced sense of agency. Strikingly, there is no way participants could have guessed what we were really analysing with this measure of time perception. Moreover, this effect has been shown to be very robust, which was unexpected. For instance, it is easy to imagine a reduced sense of agency when people are coerced to perform harmful actions, but we also observed the same effect when the action to be performed under coercion is not harmful, or even positive. When you are under coercion, you follow the intentions of someone else, it is as if your moral consciousness was gone. This was evidenced both at the behavioural level and at the neurophysiological level. Coercive contexts produce an anticipatory reduction of sensory processing gains for action outcomes. In other words, the neural processing of action outcomes under coercion involves a downregulation of outcome processing. Conversely, if one is free to choose which action he/she wants to perform, the brain uses additional resources to process this information. We assume that these results could explain why so many people obey. Actually, we observed the same pattern of results in the coercive condition and in a passive condition, where the experimenter used the participant’s hand to perform an action. In the latter case, everyone will agree that the participant is not the author of the action. Thus, under coercion, it is as if people were passive agents.

You also act as one of the researchers representatives on the university board. Do you consider this role as complementary to your research, or did it rival with it?

The answer is clearly the second option! It takes a lot of time, with numerous meetings and piles of paperwork to read. On the other hand, acting as a representative has helped me in a way, because it forced me to disconnect from my research. Sometimes, you need to have a rest about your results, and to come back later, to have another perspective.

You must know a lot about how the ULB works now?

Yes I definitely do, even if I do not know about everything yet. What I learned is that politics is complicated. But I am not interested in politics, that is not why I do this. I really wanted to help the scientific workers of the university. Their situation is not easy, I can tell as both my parents were researchers. Researchers are the pillars of the university, but at the same time it is a shame that their future is limited. The second reason I act as representative is that it is important to me to understand how my work environment is ruled. I need to understand “why” and “how” things are what they are.

For the needs of the thesis, you partnered with Albert De Beir to develop a robotic hand, which was awarded the Theodorus prize. Can you tell us about that?

Studies about the sense of agency and ownership used fake rubber hands and I always thought this equipment was really rudimentary. Luckily, during the very first lab meeting I attended as a PhD student, Albert came to offer his help in robotics. And I needed a robotic hand for my studies, so that is how we started working together. I really have to thank him, and Bram Vanderborght, for such an amazing collaboration. At first, I thought I could use the robotic hand only in very common paradigms in this research field, but then I realised I could use it also in more complex settings (e.g., with a keyboard). I really like this method as it opens up a lot of possibilities, and thus, new research questions.

For the record, you must be the only one I know who was collecting new data the morning after your PhD defense… What are your plans now?

The PhD is just a step if you would like to pursue a scientific career. The number of publications, international mobility and books, all of this counts, and generally more than just getting a PhD. Of course, I am very excited about that and it constitutes a huge step forward, but I really have to stay focused on the next step. If there is one thing that I have learned during those years, it is that getting a postdoc position is like a game, and it does not mean you will get a permanent position after that. You always have to be among the best of the bests and that is very tiring. If you do not do it 150%, then it is not worth wasting your time. I am really passionate about research, so I do have to give the best of my best. Otherwise, I might regret it afterwards.

If you had to give one advice for junior researchers entering the PhD program, what would you say?

You have to be passionate and curious about your research and not to forget why you do what you do.