Emilie Caspar and Axel Cleeremans, from CO3, together with Julia Christensen and Patrick Haggard, from the Institute for Cognitive Neurosciences (ICN) at University College London, have investigated the feeling of being responsible for an outcome and the neural response associated with this outcome under coercion.

Society holds individuals responsible for their own actions.  However, individuals sometimes claim reduced responsibility because they were “only obeying orders”.  This defence is often viewed with scepticism, because the defendant has a clear motive of avoiding punishment.  Scientific studies, such as the well-known “Milgram experiment”, focussed on how readily people comply with coercive orders, but did not systematically investigate the experience of being coerced.  In the study published in Current Biology, the focus has been set on this subjective experience of being coerced. 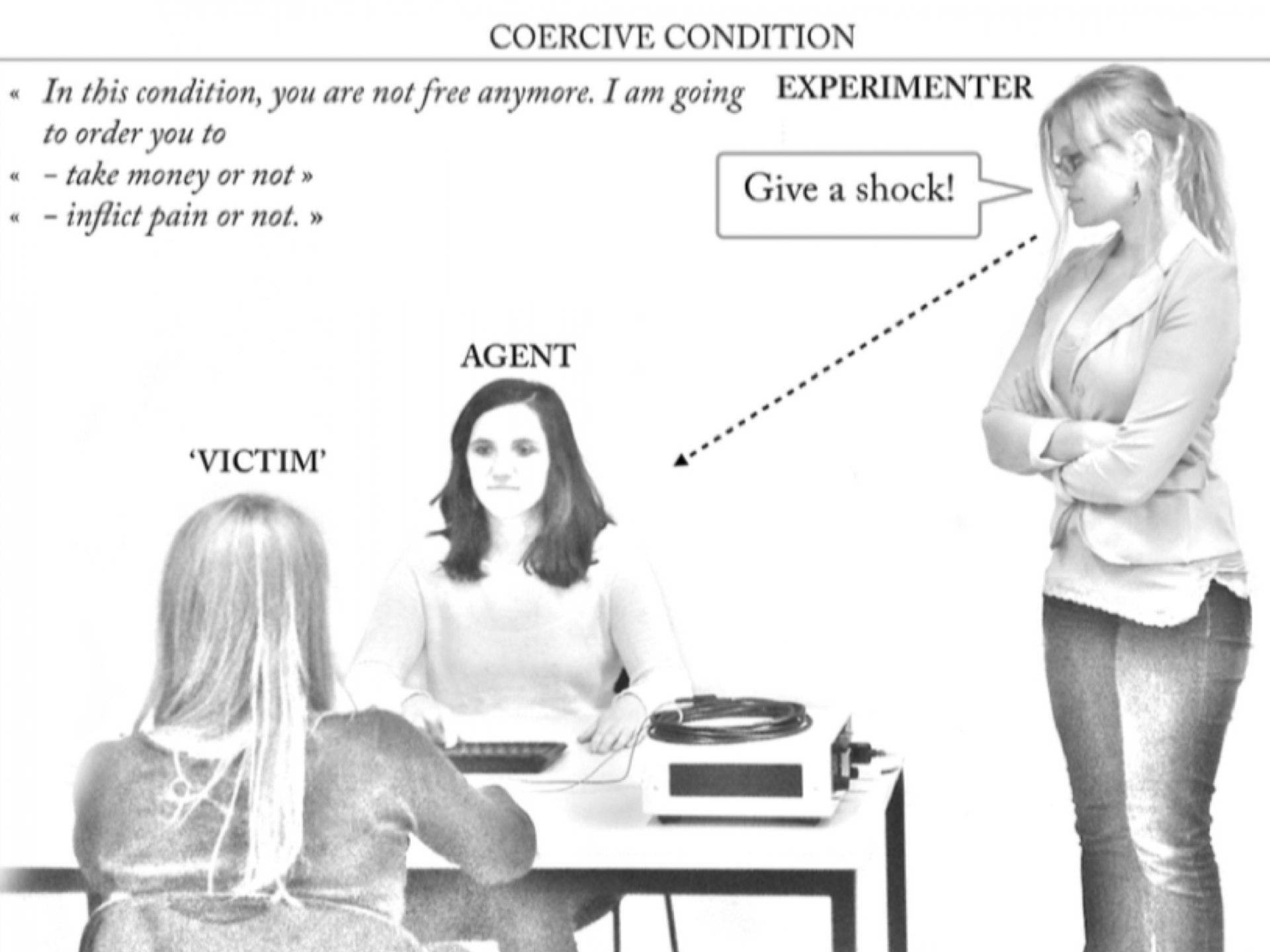 Every time the participant pressed a key, a tone occurred, at a random delay of either 200, 500 or 800 ms after the keypress.  On trials involving a financial penalty, or a shock, this occurred at the same time as the tone.  On each trial, the participant had to estimate the interval, in milliseconds, between the action and the tone.  The perceived interval between action and tone was used as a marker of the feeling of control over the outcome of action, and therefore of the feeling of responsibility.  The researchers showed that the interval between the keypress action and the tone was perceived as shorter than a control condition where the participant’s hand was passively moved down onto the key, replicating previous results, and confirming that a shorter perceived interval is a useful marker of sense of control over the tone.

Most importantly, the researchers found that coercive instructions lead to the interval between action and tone being perceived as longer than when the action was freely chosen.  These results imply that participants felt less control over the outcomes of their actions when they were told what to do, compared to when they decided for themselves.  Asking participants explicitly about their sense of responsibility after the experiment confirmed this was the case.  Although feelings of control depended strongly on the context of coercion vs choice, the results were the same on trials where the outcome was actually harmful as on trials where no harm was inflicted.  Further, recordings of the brain activity involved in processing the outcome of the action showed reduced processing for outcomes made under coercion, compared to outcomes of free choices.

“When you ask people explicitly about responsibility, they tend to report what they think reflects best on them” said Professor Patrick Haggard, the senior author of the study.  “We wanted to know what people actually felt about the action as they made it, and about the outcome.  Time perception tells us something about the basic experiences people have when they act, not just about how they think they should have felt.  Our results suggest people who obey orders could actually feel less responsible for the outcomes of their action: they may not just be claiming that they feel less responsible.  People appear to experience a sort of distance from the outcome of their actions when they are obeying instructions.  It’s important to distinguish between how our minds generate our subjective feelings of responsibility, and the objective facts of responsibility.  Of course, just feeling less responsible does not mean that you aren’t responsible, and shouldn’t be held responsible by society.  In the end, society has to deal with the objective facts of what an individual does”, said Haggard.

The researchers think their results could have wider social relevance, outside the laboratory.  “There are many situations where people obey orders: in fact, society sometimes requires people to obey an order to do something unpleasant”, said Emilie Caspar, first author of the study.  “Think of a soldier who is ordered to shoot at an enemy in the legitimate defence of his country.  Our study shows that people under orders may not feel responsible for what they do.  Perhaps that explains why so many people appeared to obey coercive orders, in Milgram’s experiments.  Our findings have several practical implications.  First, maybe people can be trained to feel more responsible: that might allow them to resist orders that are inappropriate.  Second, our results could be particularly important for people who give orders.  If people who follow orders feel a reduced sense of responsibility for their actions, then perhaps people who give orders should feel increased responsibility.  For example, in some forms of government, a minister is held responsible for the actions of the civil servants working in their department.  Society needs to carefully manage this kind of distribution of responsibility”.

“It is hard to see how society could function without a sense of responsibility”, concluded Haggard.  “We therefore need to understand the factors that influence people’s feelings of responsibility, so we can manage those factors: it’s a topic where psychology and politics become quite close”.