Is a short and transient period of visual deprivation early in life sufficient to induce lifelong changes in how we attend to, and integrate, simple visual and auditory information?

Adélaïde de Heering and her colleagues addressed this important issue in a paper recently published in Current Biology. They compared a group of adults who had been treated for congenital bilateral cataracts during early infancy with a group of normally sighted controls on a task requiring simple detection of lateralized visual and auditory targets, presented alone or in combination.

Overall, their results reveal that the absence of visual input during the first months of life does not prevent the development of audiovisual integration but enhances the salience of simple auditory inputs, leading to a different crossmodal distribution of attentional resources between auditory and visual stimuli. This runs against recent demonstration in both animals and humans that a period of blindness early in life permanently affects the brain networks dedicated to visual, auditory, and multisensory processing. 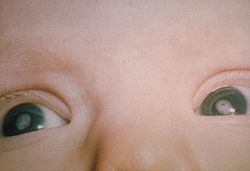 In other words, de Heering et al. propose that the absence of visual input for a brief period during early development induces an unbalanced competition between the visual and the auditory systems and triggers enhanced sensory and attentional salience for simple auditory targets, while preserving normal multisensory integration of simple targets.