Your doctoral research is dedicated to the role of sleep in the consolidation of emotionally-loaded information in memory. Can you briefly introduce us to this research topic?

It all started a few years ago, during my Master thesis. I was already interested in the role of sleep in the consolidation of emotionally-loaded information. With my supervisors Philippe Peigneux and Gaetane Deliens, we were interested in mood-related effects on memory.
I conducted a sleep deprivation study with a mood induction procedure. In the first phase, participants were induced to be in a specific mood, let’s say happiness. In a second phase, they had to learn lists of pairs of words. After that, a first group of participants was sleep-deprived during the post-learning night, whereas the other group was allowed to sleep normally. In the third phase, three days later, all participants performed a delayed recall test. Importantly, the recall phase was split in two parts, with a mood induction procedure preceding each part. In the first part, the mood induced at test was congruent with the mood induced during learning (i.e., happiness). Half of the stimuli had to be recalled in this congruent mood condition. In the second part, participants were induced to be in a mood incongruent with the mood induced during learning (i.e., sadness). The other half of stimuli had to be recalled in this incongruent mood condition. We observed that when participants had slept after the learning phase, the mood condition at test did not influence recall performance. In line with a theory developed by Matthew Walker, this suggests sleep plays a role in unbinding memories from their emotional context. 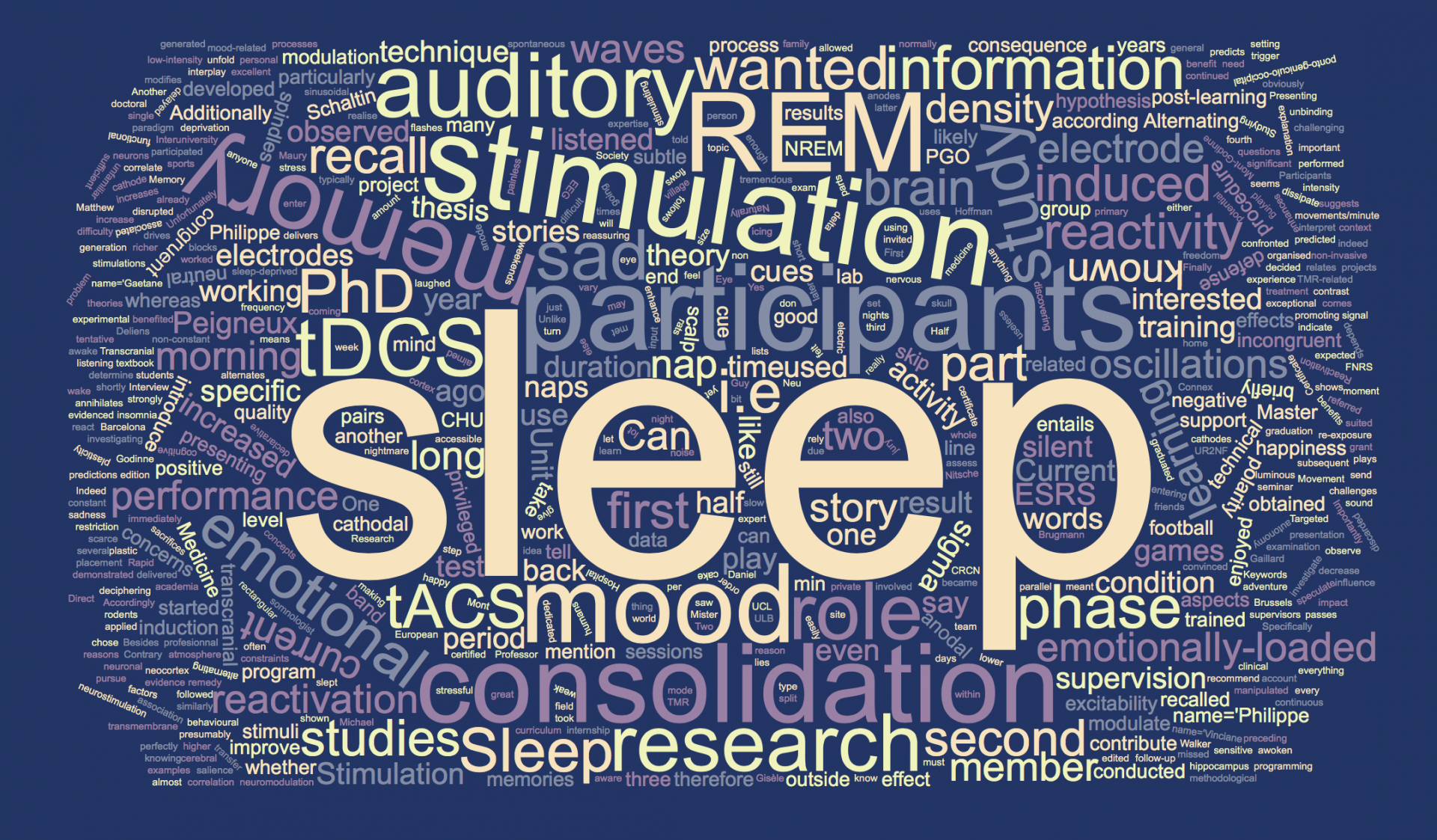 I wanted to pursue this line of research and I obtained a FNRS research grant to investigate the role of auditory stimulations during sleep on the reactivation of learning, under the supervision of Philippe Peigneux. Specifically, my PhD aimed at deciphering the interplay between sleep and emotionally-loaded information in memory consolidation. In other words, I wanted to determine whether sleep would improve memory consolidation similarly for neutral information and for emotionally-loaded information.

What is the most significant result you observed during your PhD?

One of the research questions I have been investigating concerns the specific role of Rapid Eye Movement (REM) sleep in the consolidation of sad stories. As long morning naps are known to be richer in REM sleep, we manipulated the duration of post-learning morning naps in a study using a sleep restriction paradigm. Participants listened to either a neutral or a sad story. After listening to the story, half of the participants had a short (45 min) morning nap and the other half had a long (90 min) morning nap.
We expected the duration of REM sleep to correlate with recall performance of sad stories. Additionally, we predicted a lower level of emotional reactivity when participants listened to sad stories again, after the long nap. But we did not observe any of that.
Contrary to our predictions, our data shows higher emotional reactivity when participants listened to the sad story for the second time, after the long nap. Two theories have been developed to account for the role of REM sleep on emotional reactivity. One theory predicts that mood reactivity will dissipate after REM sleep. In contrast, the other theory relates REM sleep with the consolidation of emotional salience. This in turn increases emotional reactivity in the re-exposure phase. Our results support the latter hypothesis.
Besides, we evidenced a correlation between REM sleep density (i.e., the amount of eye movements/minute) and memory recall performance for the sad story only. As the studies about REM sleep density in humans are scarce, it is difficult to interpret this result. A tentative explanation comes from rodents studies. Indeed, REM sleep density has been related to the generation of ponto-geniculo-occipital (PGO) waves. It has been demonstrated in rats that PGO waves play a role in cerebral plasticity during sleep. From there, we can speculate an association between REM sleep density and the consolidation of sad memories, but we still need experimental evidence to further support this hypothesis.
There is another result that I would like to mention. We have shown that presenting auditory cues during non REM sleep (NREM) enhances memory consolidation of pairs of words associated with these cues. Such a ‘Targeted Memory Reactivation’ (TMR) benefit seems to be related to an increased activity in the delta band during the auditory stimulation, followed by increased sigma (i.e. sleep spindles) activity during the subsequent silent period. Additionally, the silent period must not be disrupted after the presentation of the auditory cue for the reactivation process to unfold. Accordingly, in a follow-up study, we have observed that presenting a second auditory cue shortly after the first one (i.e. during the sensitive plastic period) blocks the increased activity in the sigma band, and annihilates the TMR-related benefits on memory performance. Our results therefore indicate that sigma oscillations (i.e., sleep spindles) contribute to this reactivation process, presumably by promoting the transfer of information from the hippocampus to the neocortex.

Studying the role of sleep in memory consolidation entails methodological and technical challenges. Can you give us some examples?

First of all, we had to set everything up in the lab, which took a while. Then, programming the studies with auditory stimulation was challenging, because every single auditory stimulation should send a trigger on the EEG signal. But the most important difficulty in sleep studies lies in the quality of participants’ sleep, obviously. Presenting auditory cues during sleep is likely to wake up participants. Some were awoken by the very first sound. Another problem concerns sleep quality during naps in the lab: it was often not sufficient, for many reasons (unfamiliar setting, noise…). As a consequence, the data of almost 50% of our participants had to be discarded.

In a study, you use transcranial Direct Current Stimulation (tDCS) to improve memory consolidation. Can you briefly introduce us to this technique?

When I told Philippe Peigneux I wanted to enter the PhD program, he had two research projects in mind. I chose the project about auditory reactivation, knowing that tDCS during sleep was part of that project. This neurostimulation technique is indeed perfectly suited for sleep studies, as it is non-invasive, silent and painless and it can therefore be easily used during sleep.
tDCS uses a low-intensity constant current applied to the scalp through two electrodes. The current passes through the skull and the brain from the anode (positive electrode) and flows to the cathode (negative electrode). The type of stimulation is referred to anodal or cathodal stimulation according to the electrode placement over the site of stimulation. The anodal stimulation of the cortex is known to increase brain excitability whereas cathodal stimulation is known to decrease brain excitability. The functional impact of the stimulation depends on several factors such as the polarity of the electrodes, the intensity of the stimulation and its duration, the electrode size, and the moment of stimulation. The continuous electric field generated by tDCS modifies the transmembrane neuronal potential. As a consequence, neurons are more likely to react to weak input. This effect is very subtle.
I used tDCS in one study where participants were awake. In a second step, I wanted to use Transcranial Alternating Current Stimulation (tACS) during sleep. Unlike tDCS, transcranial Alternating Current Stimulation (tACS) delivers a non-constant current which typically follows rectangular or sinusoidal waves. With tACS, the concepts of anodes and cathodes are useless as the polarity of the electrodes alternates according to a specific frequency. The primary effect of tACS is a modulation of spontaneous brain oscillations. I wanted to use tACS to modulate sleep oscillations, in order to enhance slow waves in NREM sleep and to assess whether this modulation would contribute to the consolidation of declarative memory, which is known to rely on sleep oscillations. Unfortunately, this study has not been conducted yet, due to technical constraints.

Have you used this neuromodulation technique on your own scalp?

Yes, I wanted to experience the whole thing myself. After a stimulation with the alternating current mode, I saw luminous flashes for a while. I am convinced tDCS and tACS do modulate brain processes, but I have to say that the effects are subtle and may vary from one person to another.

How does it feel to have Michael Nitsche, Mister tDCS himself, in your jury?

It was stressful and stimulating at the same time. I had met him before, and we invited him for a Connex seminar two years ago. Naturally, during the private defense, I was a bit nervous, because of his tremendous expertise. But there was no reason to be, as he is accessible and very reassuring. I had to tell him that he was involved in a nightmare I had a few nights before the defense and we all laughed about it.

About a year ago, you became an expert somnologist, certified by the European Sleep Research Society (ESRS). Can you tell us more about this certificate?

Here again, we have to go back in time. As part of my Master curriculum, I have been trained by Dr Daniel Neu and Professor Guy Hoffman during an internship in a Sleep Unit at Brugmann Hospital. I really enjoyed discovering clinical aspects of sleep. After I graduated, I have worked for a year in the Sleep Unit of CHU Mont Godinne, under the supervision of Dr Gisèle Maury. In parallel, I have obtained the Interuniversity Certificate in Sleep Medicine delivered by ULB and UCL. I have also been trained in behavioural and cognitive treatment of insomnia. Finally I decided to take the ESRS examination in sleep medicine. There is no training per se, you have to study the Sleep Medicine textbook edited by ESRS and to take the exam, which is organised once a year. I participated to the fourth edition, in Barcelona.

What drives you outside of research?

I play football an I like sports in general. I don’t know if it is a good idea to say this, but when I started the PhD, I was still going back to Schaltin (about 100 km from Brussels) three times a week for training sessions and games. After a while, I had to skip the training sessions but continued to play the games on weekends. Then at the end of the thesis, I had to skip the games themselves. I missed playing football a lot, not only because it is a good remedy against stress, but also because coming back to Schaltin meant being with friends and family, in my home village.

Is there anything else you would like to mention?

As PhD students, we are privileged, but many of us do not even realise that. I was happy enough to work in a Sleep Unit at the CHU Mont-Godinne before entering the PhD program, which means I have been confronted to the profesionnal world immediately after graduation. I am aware of both the positive and negative aspects of working outside of academia. As such, I felt even more privileged to work at the CRCN, where the working atmosphere is exceptional. I would strongly recommend this adventure to anyone who is interested in research, even if it entails making some sacrifices at the personal level, particularly at the end of the thesis. I have particularly enjoyed working within UR2NF, because I benefited from Philippe’s excellent supervision. Keywords I have in mind are ‘freedom’ and ‘autonomy’. The icing on the cake is the team, which is just great.