Cristian Buc Calderon from the Action Bias & Control group, led by Prof. Wim Gevers, defended his thesis entitled: ‘ Temporal dynamics and neural architecture of action selection’ on April 19th. It was described by one of the jury members, Philippe Peigneux, as ‘a thesis on action selection written by a man of action’. Cristian will continue and extend his work on action selection and cognitive control with Prof. Eva Vandenbussche at the Vrije Universiteit Brussels (VUB) in collaboration with Prof. Tom Verguts (Universiteit Gent), starting October 2016. Below, a short interview about his research, future plans and the most memorable moment of his time as a PhD student.

Could you briefly describe your research topic and main findings?
Well I work on the question of how humans select actions in an environment that basically affords them multiple actions. In the thesis what we did was to pit against each other two competing views of action selection. One view suggests that action selection originates from a serial implementation of distinct processes, specifically perceptive, cognitive and motor processes. And another theory is the Affordance Competition Hypothesis (ACH) [developed by Paul Cisek, 2007], which suggests that decision-making stems from the representation of multiple competing action plans in parallel, biased by relevant task factors. Both of these theories have different assumptions regarding the temporal dynamics and neural architecture of the processes involved in action selection. What we did was to try to disentangle these views with respect to these two aspects. In one study we used a reaching task paradigm, which allows you to study the temporal dynamics of brain processes involved in action selection. And basically this study showed that when a subject selects between two reaches, cognitive processes still influence the action even after the movement is initiated. So it means that action selection is a continuous process that doesn’t stop once you’ve initiated the action. 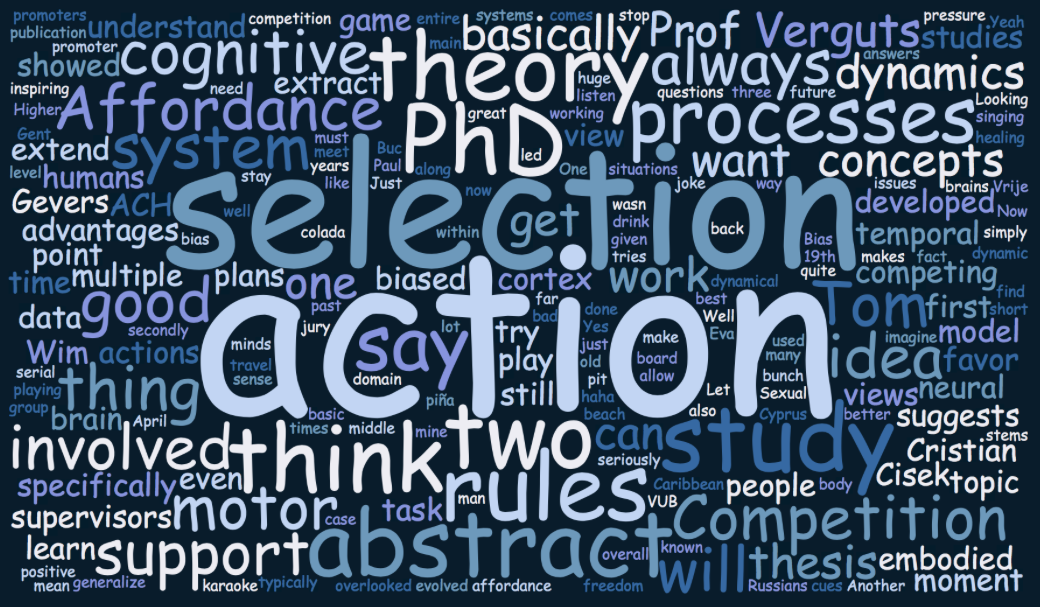 So did all your results support the Affordance Competition Hypothesis?
We have both empirical studies and a neuro-computational model. Our empirical studies really all did support the ACH, so the idea, first of all, that cognition still influences action selection after action initiation and also the fact that prior to making your selection, predictive cues already bias the activity at the level of the motor cortex. More specifically, we showed that this biasing happens up to the primary motor cortex in our fMRI study.

During your public defense one of your supervisors, Tom Verguts, made a joke saying that the Cisek theory is almost like a church, with academic supporters being its followers, because they so strongly believe in the theory and try to find evidence supporting it. What are your thoughts on this?
I would say that the data is in favor of the Affordance Competition Hypothesis. We are not necessarily in favor of the theory, neither me, nor Tom Verguts or Wim Gevers. But our data does support the theory, and I think it supports the theory in a strong way. Now, are we biased towards it? Yeah, well I guess we have good reason to be.

Let’s say you wouldn’t have any restrictions as to what and where you would study? What would you be studying in that case?
I would most likely stay on the topic of decision-making. But if I would have no restrictions at all, I would probably be creating a university in the middle of the Caribbean where I could go and drink some piña colada’s after work at the beach, haha. But seriously, what I would want to do is, now that we have given evidence for the idea of affordance competition in action selection in humans, to extend these findings into the domain of more abstract concepts. The Affordance Competition Hypothesis wasn’t developed for this and I think that is why it has overlooked so far abstract decision-making. We want to study how such a dynamic sensorimotor system can basically learn abstract rules. Let’s imagine that you are playing a board game, and typically what people will say is “Just play along and you will understand the rules”. The sensorimotor contingencies that you make when you play the game will allow you to learn the rules. You extract the rules from the sensorimotor contingencies. So my questions are first of all, how does it extract such abstract rules from the sensorimotor system and secondly, how does it generalize to other situations? We have been working on a neurocomputational model with Tom that tries to understand how this can be done within a dynamical decision-making system.

So you think the sensorimotor system is always involved in learning abstract concepts?
Yes, I do think that there is always a motor component involved in learning at some point, even for abstract rules or concepts. But this idea is not mine, it comes from a huge body of literature on what is known as embodied cognition. I think this idea of embodied cognition makes a lot of sense, especially from an evolutionary point of view. Higher cognitive functions must have evolved from brain systems subtending more basic knowledge such as sensory-motor contingencies.

You had two supervisors during your PhD, both a promoter and co-promoter. What would you say are the advantages and disadvantages of this?
There are only advantages I think. There are absolutely no disadvantages of having two promoters, because, quite simply, when you have issues or problems and need answers to a question, three brains are always better than two.

Looking back on the past few years, how would you describe your time as a PhD student?
The good thing about doing a PhD is that you have the freedom to do what you want to do. I would say that is the best thing. Another good thing is that you get to travel and meet people and get to listen to these great minds. And that’s just very inspiring. The only bad thing about a PhD is the pressure of publication that you have, which is not always good and can get frustrating at times. But overall, there are many more positive than negative memories.

What was your most memorable moment during your entire PhD?
Me singing ‘Sexual healing’ in karaoke to a bunch of eighty-year old Russians on a conference in Cyprus!