Hichem Slama successfully defended his PhD thesis titled: “Task-goal switching: Influences of time, language, alertness and expertise” mid-April, under the joint supervision of Philippe Peigneux (UR2NF) and José Morais (Unescog). With such a rich and diverse profile, no surprise he decided to investigate task switching…

You wear many hats, as clinical neuropsychologist, researcher and teacher among others. What is your background?

As an undergraduate student, I had submitted a FNRS research fellow project on ADHD, with Patrick Fery and José Morais as supervisors, but I did not get it. I was lucky enough to start working as a full-time clinical neuropsychologist at Erasme Hospital in December 2001. I worked there for 4-5 years while staying in touch with ULB to attend some Scola seminars (the old version of the Connex seminars). One of the invited speakers was Akira Miyake, who was studying the role of language in cognitive flexibility. His talk was very inspirational, even though I did not like the paradigm used in his studies (a large part of my doctoral research aims at deconstructing some aspects of the task-switching paradigm). Back then I was also appointed teaching assistant in neuropsychology for Philippe Mousty and José Morais. I was very much enjoying teaching and wanted to keep working as neuropsychologist. The only aspect missing was research, and it came with a half-time position as research and teaching assistant, about ten years ago. 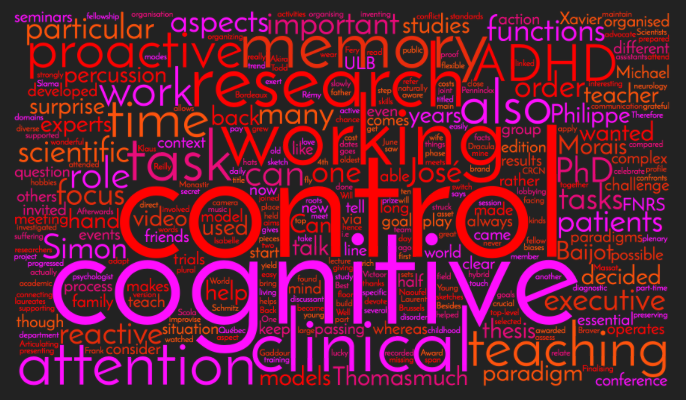 In your thesis, you refer to a conceptual difference between reactive and proactive control. Can you tell us more about it?

When I came back to the university to start my PhD, experts in the field of cognitive control were evidencing the crucial role of goal maintenance. In other words, it is important to be able to maintain the objective or the context of a particular situation in order to be able to exert control on it. With that in mind, I decided to focus on task switching or cognitive flexibility, because this cognitive function allows investigating cognitive control in situations where we have to adapt to a changing context. I discovered a very elegant model of cognitive control, developed by Todd Braver and colleagues, according to which cognitive control operates via two main modes: reactive and proactive. Reactive control intervenes on the fly, when we are facing a conflict or a new situation whereas proactive control operates before the occurrence of cognitively demanding events and biases attention, perception and action systems depending on the goal. As such, proactive control can be linked to task switching, because the task-switching paradigm makes it possible to distinguish between trials requiring a direct response and trials i which a preparation time is provided.

Recent influential models of working memory also focus on the activation and maintenance of task goals and task sets. Does that relate to proactive control in task switching? What is the role of attention in all this?

Working memory is indeed a research domain close to mine. I like Klaus Oberauer’s approach, with a critical perspective on some methodological aspects of the paradigms. I also wanted to connect my work with neuro-computational models of working memory, in particular the model developed by Randall O’ Reilly and Michael Frank, who conceive working memory as the process by which objectives are maintained and updated, via the dopaminergic system. I have administered different kinds of working memory tasks in my studies, in order to assess the contribution of working memory in task switching. I have adapted complex span tasks, N-back tasks and Brown-Peterson tasks, in order to separately investigate the different aspects of working memory known as processing and maintenance of information, updating of information and resistance to interference. To my surprise, the task-switching costs never correlated with any of those aspects of working memory. This indicates that working memory and task switching are related constructs, but do not line up completely. When it comes to the role of attention in all this, I obviously consider attention as an essential ingredient. It is clear when you read my chapter about cognitive control, because the general title does not mention control, but rather attentional functions. I started with the classical distinction made by Michael Posner between executive attention (which can be related to cognitive control), alertness (similar to the preparation to action), and orienting. My work definitely focused on executive attention. During my PhD defense, we have discussed the relevance of this taxonomy (and others) and the terminologies used (i.e., attention, executive functions, cognitive control). Indeed the current trend is to go beyond classifications, and focus on the underlying processes. But on the other hand those taxonomies reflect double dissociations in cognitive functions that have been evidenced in patients. It is important to pay attention to those clinical facts and to address them properly.

Can you apply the results of your doctoral research in clinical settings?

I am really committed to transfer the scientific knowledge on cognitive control in clinical models, especially in ADHD. The first step is to validate the paradigms with patients. The assessment of reactive vs. proactive cognitive control is currently absent in clinical neuropsychology and is not so much investigated in clinical research. In particular, many experts consider that the roots of ADHD are to be found in an executive disorder, and hence talk about cognitive control, but they do not distinguish between reactive and proactive control. So there is much to be done there. The question is: Will this clinical study line yield interesting results in order to help patients or to help in the diagnostic phase?

You are involved in the organisation of the 4th international French-speaking conference on ADHD, to be held at ULB in June, as member of both the organising committee and the scientific committee. Can you tell us more about that?

This scientific meeting is specific in that on the one hand, it meets international, top-level standards and on the other hand, it gives the floor to French-speaking experts. In 2012, I attended the Québec edition with Simon Baijot, and we had a wonderful time there, also with Rémy Schmitz. Because I have been awarded the ‘Best scientific communication’ prize, I had the chance to meet the organizing committee and made friends with many of them. Afterwards I have been invited as discussant in 2014 in Bordeaux and in a related conference organised by Dr. Naoufel Gaddour in Monastir. When it became clear that the 2016 edition would take place in Brussels, thanks to the active lobbying of Dr. Laurent Victoor, I naturally joined the team, with Isabelle Massat, Simon Baijot, Thomas Villemonteix and Ariadna Albajara. This meeting is a great opportunity for me to articulate my research on cognitive control and my experience as clinical neuropsychologist. As laureates of the Young Scientists Award of the World Congress on ADHD, Simon Baijot, Thomas Villemonteix and myself will be presenting our work on ADHD during a plenary session: Simon and I focus on cognitive functions, and in particular on cognitive control whereas Thomas Villemonteix addresses the question of the efficacy of cognitive training.

You are the living proof that it is possible to teach, work as clinical neuropsychologist, conduct research, have a family and play in a percussion group, all at once. What is your secret?

Well, contrary to what my wife says, I am rather flexible myself and can easily switch from one role to another. But there is always a switching cost. Finalising my thesis was a long process. As compared to young researchers supported by a FNRS fellowship, who can devote 100% of their time on their studies, my work progressed very slowly. As the years were passing, we wanted to build a family. On top of that, working with patients is very demanding, because your daily work confronts you to suffering, especially in the neurology department. Articulating all this is a challenge that all part-time research and teaching assistants experience. But at the same time, it is what makes their contribution essential, as they help connecting the academic world with other domains. I am very grateful to Philippe and José, my supervisors, for being aware of this challenge and supporting me. It is important to keep in mind that the passing of time can also be an asset, especially in teaching skills. Therefore, I strongly advocate for preserving this hybrid position, even though it is not easy. Besides all this, music is one of my hobbies. I play in a percussion group and have also organised several cultural events. Both these activities have actually helped me becoming a teacher, because I was used to talk in public, to teach (I was teaching percussion). What is important to me as a teacher is to bring students a complex and plural perspective on the world. My own cultural diversity helps here, as I am half Belgian, half Tunisian.

In the traditional video prepared by CRCN members to celebrate the brand new PhD, we saw selected pieces from a sketch where you were giving a lecture (it all goes back there) about vampires. It comes as no surprise that you are here now…

We did that with one of my oldest friends, Xavier Penninckx, who is also a psychologist. We grew up together and were always inventing many things. That day, we had decided we would improvise about vampires and Dracula and we recorded our sketches with the video camera of Xavier’s father. I had not watched that video for a long time and it struck me now that my love of teaching dates back to my childhood.