Alison Mary recently presented her PhD thesis, dedicated to memory consolidation and brain plasticity in healthy aging. She conducted her doctoral research at UR2NF, under the supervision of Philippe Peigneux.

First of all, congratulations on your thesis. Can you introduce us to your research topic?

My thesis investigated memory consolidation in healthy aging. This topic has already been extensively studied, but many authors have focused on memory consolidation in a time frame from 12 or 24 hours after the learning phase. To the best of my knowledge, we were the first to look at age-related differences in neural plasticity immediately after learning, with magnetoencephalography (MEG). This was possible thanks to Xavier de Tiège and his team at the Brain Functional Mapping Laboratory (Erasme Hospital). We have investigated both procedural memory with the finger tapping task and episodic memory with a verbal learning task. In the finger tapping task, young and older participants had to learn a finger-tapping sequence and to reproduce it after varying delays. When participants have to reproduce the sequence after a 30-minutes delay, young adults show a sudden increase in performance, as compared to the learning phase. This effect, which is very specific to motor learning, is known as the boost effect. We replicated the boost effect in young adults, but not in older participants. After three nights of sleep, young adults exhibit an offline gain in performance whereas older adults simply stabilize performance from training to retest. Additionally, we evidenced distinct neural activity and connectivity patterns after learning in young vs. older adult. In other words, our results indicate age-related differences in neural plasticity immediately after procedural learning. 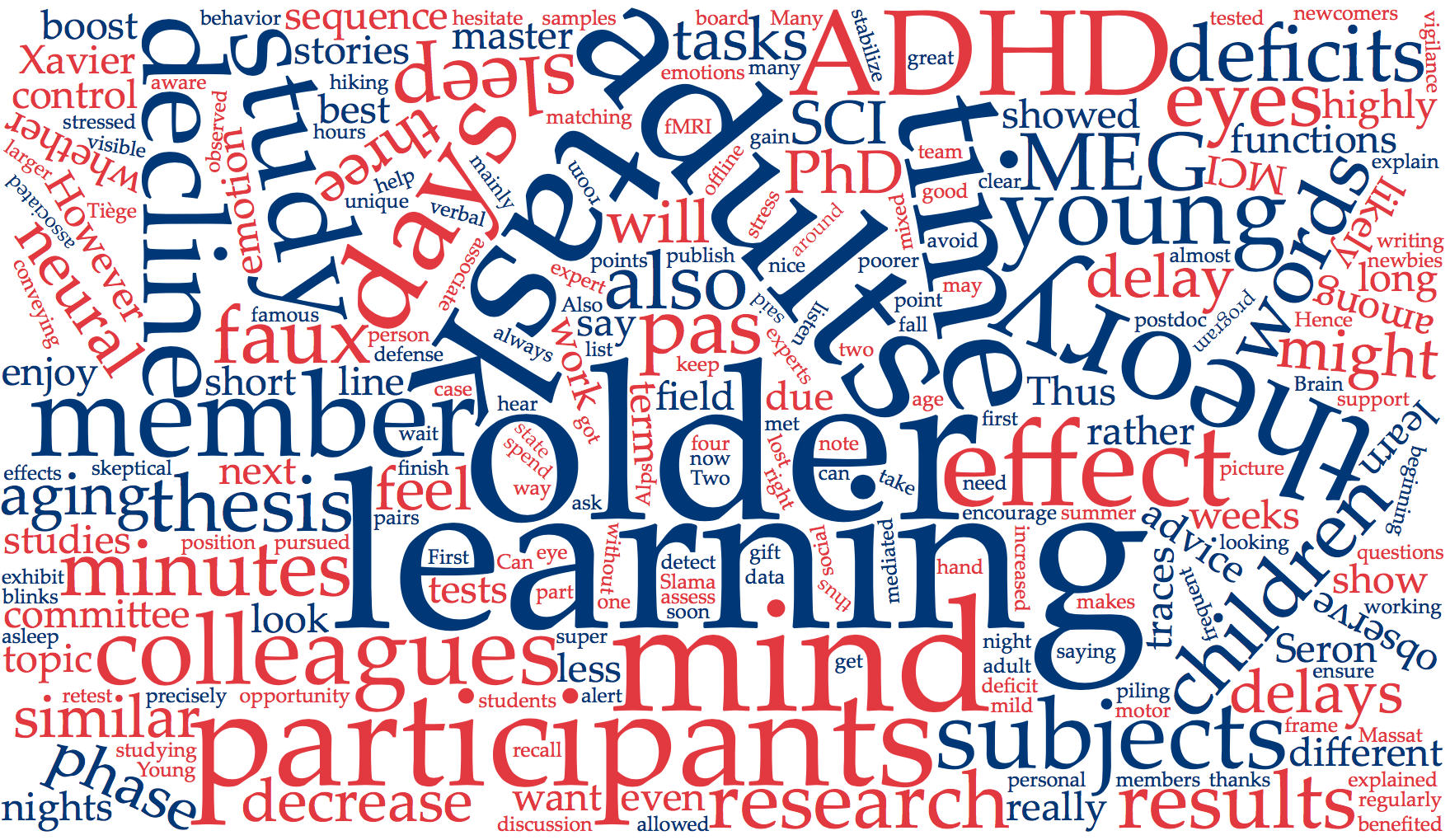 We were also interested in age-related effects on memory consolidation in the very long term, that is after a few days and a few nights of sleep. Interestingly, most – if not all – studies dedicated to this question tested memory traces after one night of sleep only: results are mixed as to whether there is an age-related decline in memory over time, or not. We thus decided to examine memory performance at three different delays after the learning phase: 30 minutes, 3 days or 7 days. Young and older participants had to learn a list of pairs of words, each associated with pictures to maximise learning. Hence the baseline performance was the same in both age groups. After 30 minutes, recall performance did not decrease over time, and that was the case also for older adults. However after 3 days, we observed a decrease in performance for both the procedural and the episodic memory tasks. In addition, in our study published in Frontiers, we evidenced increased sleep fragmentation due to more frequent intra-sleep awakenings in older participants, which may contribute to age-related decline in episodic memory consolidation 7 days after learning. Strikingly, older adults showed a larger detrimental effect of time on memory traces. In other words, if we look at memory consolidation at longer delays, we observe an age-related decline that is not visible at shorter time frames: this phenomenon has been coined accelerated forgetting.

What are the applications of your research?

Our study about accelerated forgetting has an important impact on clinical assessment, because the memory tests which are part of the regular neuropsychological battery do not probe memory at very long term. Standard neuropsychological assessment usually tests long-term memory after a period of 30 minutes, which might not be sensitive enough and underestimate memory decline. For instance, a study by Manes and colleagues (2008) compared memory performance of subjects with memory complaints but normal performance on standard memory testing (SCI), mild cognitive impairment patients (MCI) and control subjects after a 30-minutes delay or a 6-weeks delay. After 30 minutes, SCI subjects had a performance similar to control subjects. However, a clear memory decline similar to MCI patients was evidenced in SCI subjects after 6 weeks. Our results show that we do not need to wait 6 weeks to get a sensitive measure of decline in memory consolidation in healthy aging: probing memory three days after learning is sufficient.

You recruited older adults and convinced them to participate to a MEG study, in Erasme. How did you do that?

It was not that difficult, because the older adults were very interested in the study and willing to do their best. Actually, I am aware that my studies include highly educated and highly functioning participants, who might not be representative of older adults in general. Paradoxically, even though the MEG is an impressive setting, I had to monitor participants eye blinks during the resting state sessions to ensure they did not fall asleep. Whenever I suspected a decrease in vigilance, I said a few words to the participant to help him/her staying alert. It occurred only once that a participant was not feeling comfortable in the MEG. But he did not want to interrupt the experiment. Thus I stayed with him in the room throughout the experiment and he did great.

Have you other research interests?

I am also interested in atypical development. More precisely, I have been studying the relationship between theory of mind and executive functions in ADHD for my master thesis. That is where I met Hichem Slama, who is an expert in that field. At the time, he was rather skeptical as to whether we would observe any effect of ADHD in theory of mind, as inappropriate social behavior in ADHD children might be mainly explained by attentional and executive deficits rather than by theory of mind. We administered two well-known tasks to assess theory of mind: the eyes task and the faux pas task. Surprisingly, ADHD children showed a poorer performance in both tasks. In the eyes task, they were less likely to associate a picture of eyes conveying a specific emotion with the matching emotion (among four different emotions). In the faux pas task, they were less likely to detect, among 20 short stories, the 10 short stories with a faux pas. Two other master students have pursued this line of research. This allowed us to increase the samples and to publish the data. Our results evidenced impaired theory of mind in ADHD children. Crucially, this effect was mediated by deficits in attentional and executive functions. In the eyes task, the attentional deficits explain most of the deficit in theory of mind, and in the faux pas task, theory of mind is impaired due to inhibition deficits. I also contributed to a fMRI study comparing working memory and inhibition in on- vs. off-medication ADHD children, in collaboration with Philippe Peigneux and Isabelle Massat.

Xavier Seron, who is a very famous cognitive neuropsychologist, evaluated your dissertation. How does that feel?

Before being a member of my PhD thesis committee, Xavier Seron had already been a member of the supervisory board. Thus I have benefited from his feedback and advice all the way, and I am very grateful for that. Naturally, in the beginning, I was super stressed. But he is a very nice person, he makes you feel comfortable and he always points to interesting questions. And it is without saying that his knowledge in neuropsychology is really appreciable.

What would you say to newcomers in the PhD program? And to your colleagues who are almost at the finish line?

To the newbies, I would recommend to work regularly and to avoid procrastination. Otherwise, the work will be piling up very soon. But on the other hand, it is important to listen to themselves and to take time for them. Also, if at some point they feel lost, they should not hesitate to ask around. Many colleagues are or have been in a similar situation and can provide support and good advice. To my colleagues who are currently writing their dissertation, I want to say that they should not stress, even if it is difficult for them to hear that right now. But it is important to keep in mind that the PhD defense is a unique opportunity to have a really interesting discussion with experts in the field. I would encourage them to enjoy the time they will spend with the members of the committee.

I am currently looking for a postdoc position in aging and memory. On a personal note, I will enjoy the gift I got from all my colleagues to go hiking in the Alps next summer.