José Morais, who was born and raised in Portugal, was a member of the psychology department at the ULB long before the CRCN even existed in its current form and has remained closely connected to the research carried out in the UNESCOG group led by Régine Kolinsky after his official retirement in 2003. His book “L’art de lire“, which was published in 1994, is well known by former ULB psychology students and current researchers in the field of literacy and reading as well as by many lay people interested in the psycholinguistic aspects of learning to read. He is currently in the process of writing a book in French that focuses on the relationship between literacy and democracy.

You were politically active in Portugal before you came to Belgium. Could you tell us a bit about how and why you ended up at the psychology department of the ULB in the 1970’s? 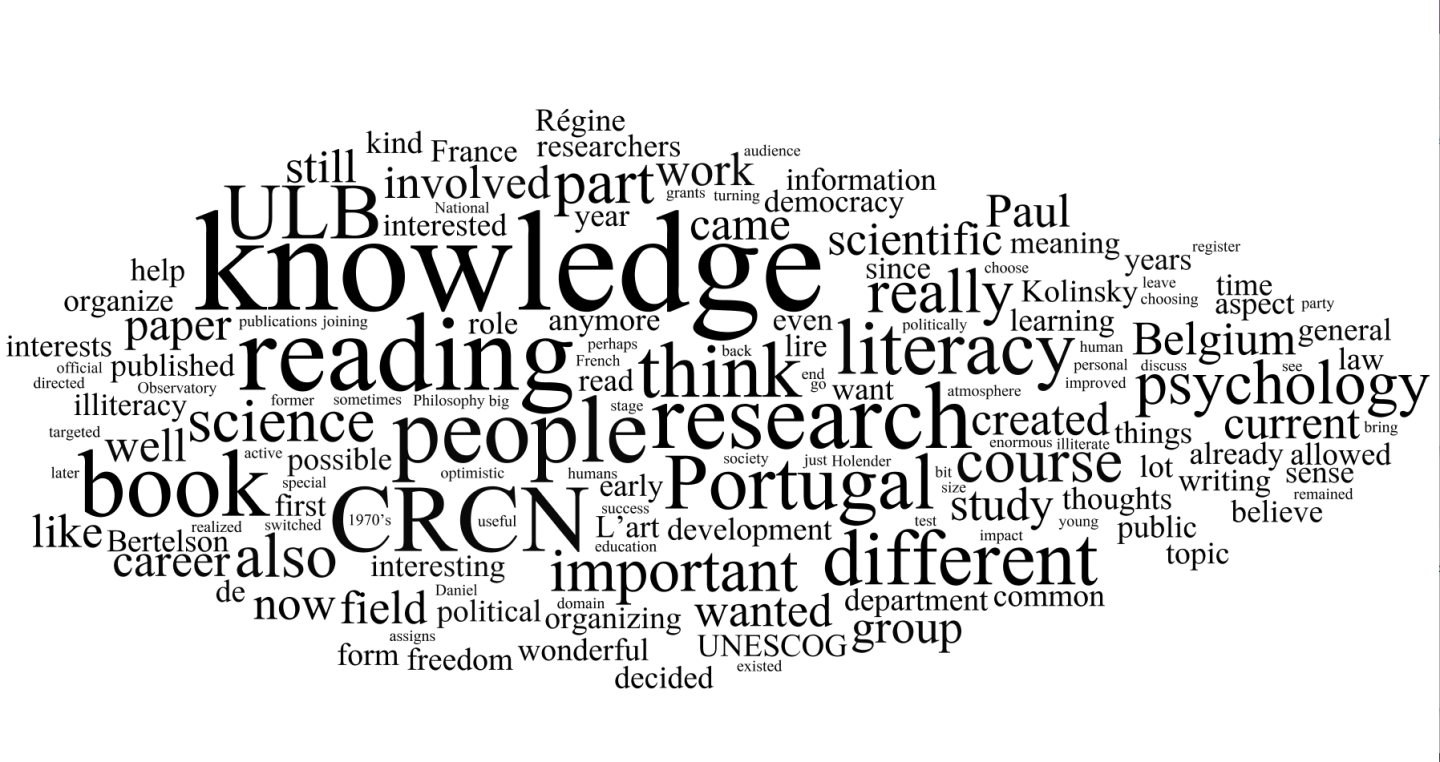 “I was an opponent of the Portuguese dictatorship. Due to disagreements with my political party I had to leave Portugal, so I came to Belgium as a political refugee of the United Nations since Belgium allowed refugees from Portugal, and the ULB was really wonderful because they understood my situation and allowed me to register as a student very late in the academic year. I remember I only had 24 hours to choose my study subject from a big book describing all the possibilities. In Portugal I had done 2 years of law but didn’t want to continue in law. I would have liked to do Philosophy of Science, but didn’t have the mathematical experience and knowledge in hard sciences to study that. Too bad, but I didn’t regret at all choosing Psychology in the end, because in my second year of study I had an extraordinary professor (Paul Bertelson) and by attending his lectures I realized that what I wanted to do was actually possible in psychology as well, so by that time my career was set.”

You completed your PhD on a different topic and only switched to the field of reading and literacy later. How did that come about?

“Paul Bertelson wanted to organize a course on reading and involved Daniel Holender, Jesus Alegria and myself in it, and the four of us prepared this course. It turned out to be a very interesting course, the students were amazed hearing our discussions. So as I was finishing my thesis about the functional differences between the hemispheres, I had already started to work in the field of reading and literacy. In 1979, I published a paper with Paul, Jesus Alegria and Luz Cary, a PhD Portuguese student, about phonemic awareness, more exactly its absence, in illiterate adults in Portugal, which is now a reference. So the course itself, but mainly the work all of us did subsequently in different directions, gave the lab an international aura in the domain of reading. We were also fortunate to have inspired bright students who did their PhD theses with us: Alain Content on the development of phonemic awareness, Jacqueline Leybaert and Philippe Mousty on reading in the deaf and in the blind people, respectively, Ronald Peereman on skilled reading, Régine Kolinsky on the effects of literacy on implicit and explicit visual processing. Almost all of them could remain with us and contributed to make of the old “Laboratoire de Psychologie expérimentale” a highly productive research lab in the 80’s and 90’s.”

Besides research, a part of your career has also focused on bringing science to a wider audience, including your book, which was targeted at the general public. What are your thoughts on this aspect of your career?

“In my early life I had been involved in helping to re-establish democracy in Portugal, and had to live clandestinely, but from the point when I came to the ULB I became a man just occupied with science and teaching. In 1994, my book (L’art de lire) changed that again because it was quite a success in France. I became involved with the National Observatory for Reading that had been created by the Minister of Education of France. Our mission was to bring our scientific knowledge about learning to read to the public and also, importantly, to infer from this what could be improved in reading programs and education. So that was very interesting, but above all I define myself as someone who is interested in science, even if I have all those other interests.”

You are still associated with the UNESCOG group directed by Régine Kolinsky. What is your role in the current research of this group?

“Now my way of doing research is peculiar, perhaps I shouldn’t say this to you, but I don’t like it anymore to write methods and results etc, because it’s always the same thing. So what I like to do now is to discuss possible issues with young researchers and find ways to test hypotheses and then when the work is finished to see the drafts and help write the paper. And sometimes I am listed as co-author. For me it doesn’t matter anymore if I have publications with my name on them or if have a high impact factor, so I feel myself more free. What’s also important for me now is to make our scientific knowledge useful for people outside of science, especially to help in reducing illiteracy.”

What is the personal meaning of the domain of reading and illiteracy to you?

“I really like the philosopher Spinoza, who described three different kinds of knowledge, one of which is scientific knowledge. He assigns a very important role to this kind of knowledge. The third kind of knowledge is more general or abstract, knowledge of what determines you as a human being. He said that when you have this kind of knowledge you get freedom. So in this sense literacy gives people the possibility of acquiring scientific knowledge and from it reach freedom. I also believe that real democracy is to give all people the information and education that will enable them to be literate in the deepest meaning of the word and to let people organize their lives as they want. In that aspect I am still a marxist, since it was Marx’s ideal that all human beings should be allowed to associate, work and act voluntarily in society.”

You have been a part of the CRCN from a very early stage onwards already and have for a large part witnessed the development of the Center. What do you think of its developement?

“I think the CRCN is a splendid accomplishment, I’m really sincere, otherwise I wouldn’t say that. I think it is great that the CRCN was created, joining different people working on different things, but with lots of common interests. The whole atmosphere here is very nice. The CRCN increased in size a lot, the difference with my “time” is enormous. Ten or 15 years ago, I couldn’t have imagined this CRCN. I’m really happy that this happened and I’m optimistic about its future too.”